Prior to RSpec 3.7 feature specs were the way to go for full-stack testing of application interactions involving javascript in a real/headless browser environment. Recently released RSpec 3.7 added support for system specs based on Rails system tests. ActionDispatch::SystemTestCase was introduced in Rails 5.1 and provides preconfigured Capybara wrapper for real browser testing. Having preconfigured Capybara with commonly used features baked right in the framework means much less manual configuration hassle which often was tricky to set up properly. The advantages of using system specs over feature specs are the following:

Given the above, it’s also worth emphasizing that the RSpec team now recommends system specs over feature specs for Rails 5.1 and above.

Let’s start by creating a new rails project. We’re going to exclude the default Rails Minitest integration with --skip-test as we’re going to use RSpec.

Except for adding rspec-rails to Gemfile, the most challenging part of the setup may be to figure out which gems are required for headless Chrome browser testing. Here is list the of required gems:

Make sure that chromedriver is installed:

Given we have a simple home#index action, configured as root in routes.rb, that renders app/views/home/index.html.erb:

we can implement the first system spec spec/system/home_spec.rb as follows:

Let’s see if it works:

Obviously we don’t want to set the driver in each spec. We can configure a global default in spec_helper.rb. For example:

and override the default driver in individual spec files when needed.

It’s worth mentioning that in case of spec failure, system spec automatically takes the browser screenshot and displays it right in the terminal output which is a very handy feature. 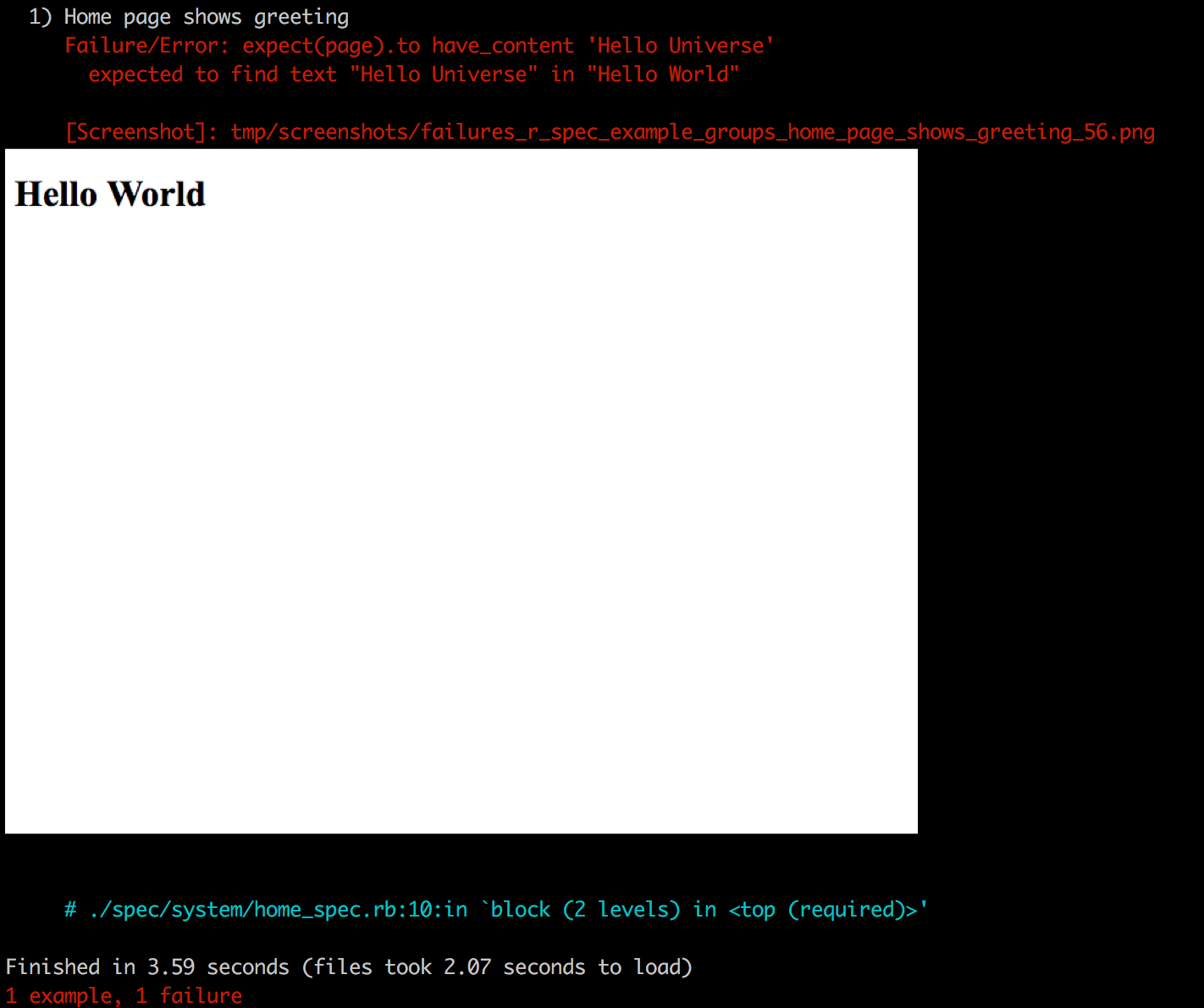 That’s the feature baked in Rails system tests. There is no need to configure it manually as it was in case of feature specs, for example with supporting capybara-screenshot gem.

After modifying the spec assertion to expect(page).to have_content 'Hello Universe', we still get the passing spec testing client-side javascript changes:

As mentioned before, database changes in system specs are automatically rolled back. Let’s see if it’s the case by adding some database output in our page under test:

and the rspec result is:

That’s great! We no longer need to configure database_cleaner to clean database state after spec example run as it was previously required in case of feature specs.

The source code of the demonstrated example can be found on GitHub.